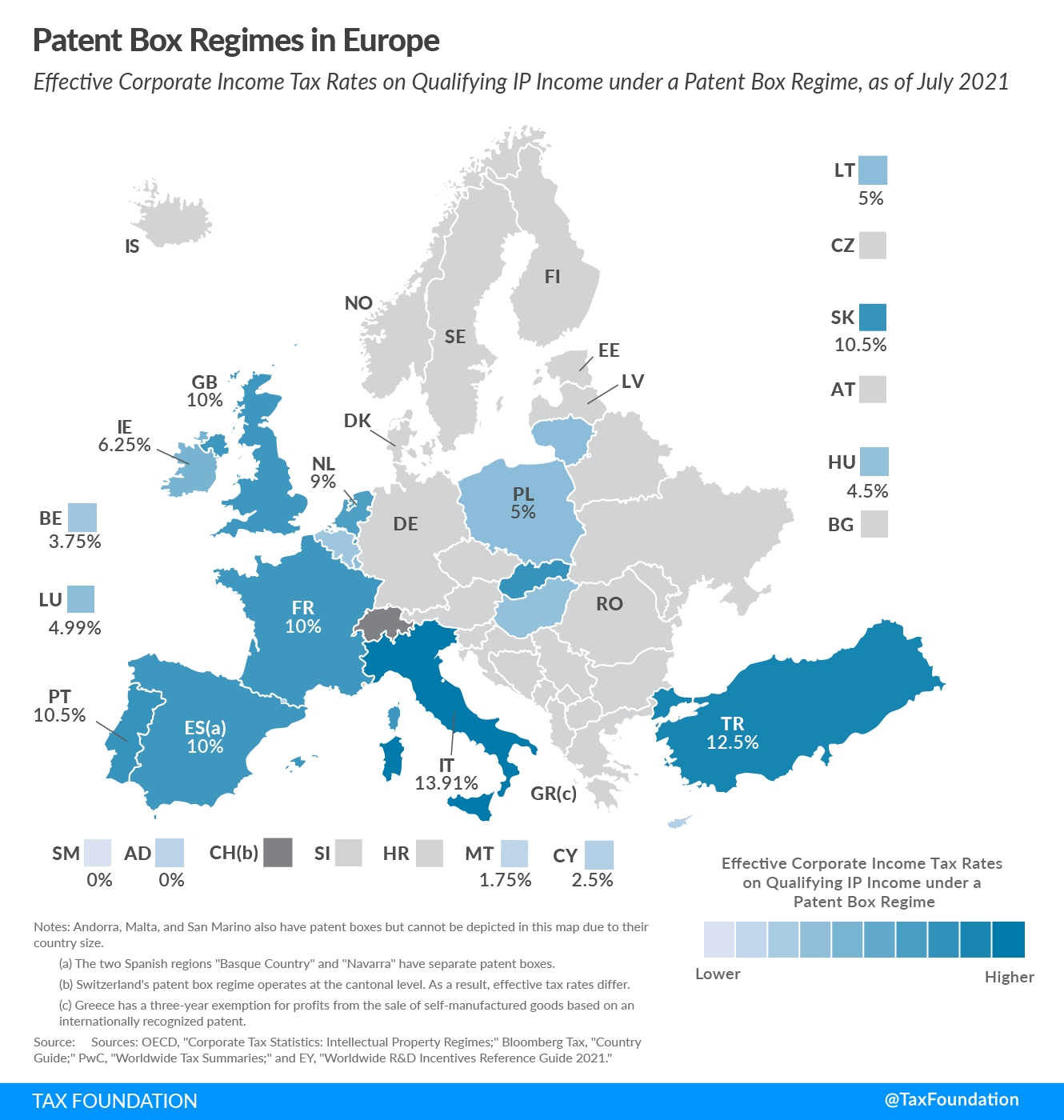 Patent box regimes (also referred to as intellectual property, or IP, regimes) provide lower effective tax rates on income derived from IP. Most commonly, eligible types of IP are patents and software copyrights. Depending on the patent box regime, income derived from IP can include royalties, licensing fees, gains on the sale of IP, sales of goods and services incorporating IP, and patent infringement damage awards.

Generally, the aim of patent boxes is to encourage and attract local research and development (R&D) and to incentivize businesses to locate IP in the country. However, patent boxes can introduce another level of complexity to a tax system, and some recent research questions whether patent boxes are actually effective in driving innovation.

As today’s map shows, patent box regimes are relatively widespread in Europe. Most have been implemented within the last two decades.

The reduced tax rates provided under patent box regimes range from 0 percent in San Marino to 13.91 percent in Italy.

In 2015, OECD countries agreed on a so-called Modified Nexus Approach for IP regimes as part of Action 5 of the OECD’s Base Erosion and Profit Shifting (BEPS) Action Plan. This Modified Nexus Approach limits the scope of qualifying IP assets and requires a geographic link among R&D expenditures, IP assets, and IP income. To be in line with this approach, previously noncompliant countries have either abolished or amended their patent box regimes within the last few years.

Many European countries offer additional R&D incentives, such as direct government support, R&D tax credits, or accelerated depreciation on R&D assets. The effective tax rates on IP income can therefore be lower than the ones stated in the respective patent box regimes.

Best Winter Coats for Men and Women at Work
In the blogs: Constantly evolving
Home purchase cancellations are above 15% for the second straight month. It’s important to know the financial repercussions
Combined Federal and State Corporate Income Tax Rates in 2022
On the move: BSS&F appoints first business dev director