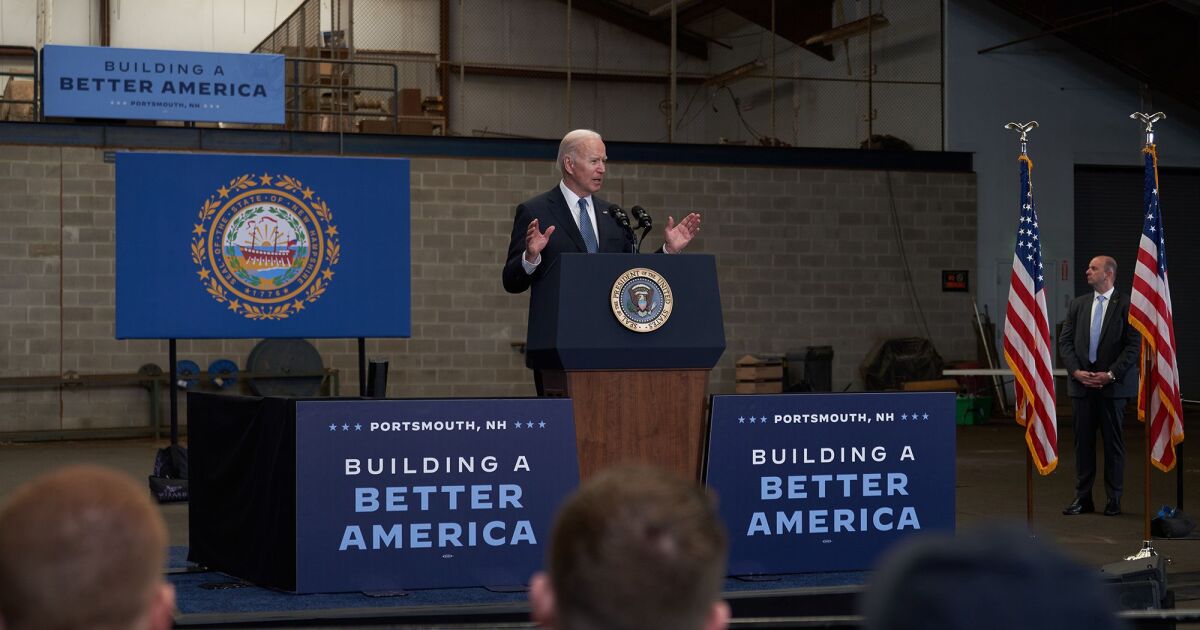 After championing the biggest expansion in federal aid to American families in decades, President Joe Biden is now putting the government’s budget deficit back in the spotlight — a nod to fiscal conservatism that may be needed to pass any more of his agenda.

In recent speeches, Biden has promoted the rapidly declining shortfall between revenues and public spending — a result of the U.S. rebound and the phasing out of pandemic aid — while emphasizing that his long-term economic agenda would speed the deficit’s contraction.

But it’s a delicate balancing act. There’s no guarantee the new approach will unfreeze the remnants of what was a $2 trillion program, amid polls showing disappointment among Democratic voters about a failure to deliver on major campaign promises. And deficit reduction is nowhere near a priority for progressives, an important constituency for the president.

At the same time, the window to pass signature laws before midterm elections in November is swiftly closing. And Republicans all the while are hammering Biden for profligate spending that they say has fueled the fastest inflation in decades.

The president’s recent focus on the deficit issue “is very clearly a Manchin play,” said Ben Ritz, director of the Progressive Policy Institute’s Center for Funding America’s Future. “But I think Manchin’s concern about it is rooted in a reality that deficits do matter.”

Biden had addressed concerns about federal borrowing when originally composing his economic agenda, ensuring that it was paid for in large part through tax increases and — after a decade — would bring down the budget gap. But he’s lately been touting the current slide in the deficit and emphasized enacting a passage that further reduces the shortfall in the short-run — more in line with Manchin.

Felicia Wong, president and chief executive officer of the Roosevelt Institute, a progressive research group, said aggressive deficit-reduction could kneecap the recovery. “Now is just not the time for deficit hawkery.”

White House officials have repeatedly said they won’t discuss any negotiations with Manchin since he scotched Build Back Better last year. Biden’s top economic adviser, Brian Deese, cast the president’s recent emphasis on cutting the deficit as part and parcel of his larger economic ambitions.

“You can actually achieve stronger growth, stronger labor market outcomes and faster deficit reduction” in concert, Deese said in an interview. “That’s the core to the way we think about deficit reduction — in the context of an overall economic strategy.”

As a senator, Biden occasionally expressed concern about the budget deficit — he at one point favored a balanced-budget amendment to the Constitution, calling in February 1995 for a “new tradition of fiscal responsibility.”

Yet ever since the 2008 financial crisis, the budget deficit and national debt have been all but afterthoughts in Washington — for both parties. President Barack Obama and congressional Democrats sought to increase federal spending to stimulate the economy, while President Donald Trump and Republicans slashed taxes and raised spending on defense.

Neither leader paid much regard to spending reductions anywhere in the federal ledger, and rock-bottom interest rates gave them little incentive to do so.

The federal deficit soared to $3.1 trillion in 2020 — more than triple the 2019 level — as the COVID-19 pandemic spurred a massive expansion in government spending, coupled with plummeting revenues.

One of Biden’s first acts after he took office was to ratchet up federal spending even further, passing a $1.9 trillion package intended to relieve American families still struggling with the economic fallout of the pandemic. In the month before his inauguration, he warned that frugality would add more to federal debt.

Even so, the deficit fell by more than $360 billion during his first year in office, according to the Congressional Budget Office — a record plunge reflecting the slower pace of pandemic-relief spending than in 2020, along with the budding economic recovery.

Biden is now casting deficit reduction as part of a plan to combat inflation — his party’s foremost political obstacle entering the 2022 campaign. He’s also touted proposed assistance to families as a solution to help address the surge in the cost of living, with consumer prices climbing the most in 40 years.

“I’ve called on Congress to move immediately to lower the cost of family utility bills, prescription drug bills and more — while lowering the deficit and reducing inflation,” Biden said on Tuesday in New Hampshire, repeating a line he’s regularly used in speeches. In Iowa last week, he said his plan was about, in part, “lowering the deficit to reduce inflationary pressures.”

But liberal Democrats are concerned that too much emphasis on attempting to balance the budget will undermine the growth that brought the U.S. economy quickly out of its pandemic doldrums.

On the flip side, still-rising inflation is entrenching Manchin’s objections to further unchecked expansions of federal spending, narrowing Biden’s opportunity to strike a deal that can pass both chambers. And with the Senate split 50-50 between Republicans and Democrats and allied independents, Manchin’s vote is critical.

The West Virginia Democrat has said that any effort to resurrect Build Back Better should be built in large part around “fighting inflation or deficit reduction.”

While Biden touted that his administration’s latest budget blueprint featured a $1 trillion reduction in the deficit over a decade, it still showed a cumulative increase in the debt load of roughly $15 trillion. That would push the federal debt to nearly $40 trillion by 2032.

But those estimates, released in March, pre-dated the latest surge in yields on Treasuries — propelled by a newly aggressive Federal Reserve determined to quell inflation. The increase in borrowing costs will offer Republicans fresh ammunition to charge Biden with fiscal indiscipline.

Moody’s Investors Service projects that U.S. debt payments will rise to 19% of federal revenue by 2031, from 9.5% this year.

“Deficits definitely matter,” William Foster, a vice president at the ratings service, said in an interview. “It’s not a question of ‘if’ the U.S. can borrow, it’s a question of ‘at what cost,’” Foster said. “The fiscal space is not unlimited.”

— With assistance from Erik Wasson

AP named as top automation priority
Tax Fraud Blotter: Those prison blues
Benchmark bond yields are ‘bad news’ for investors as the Fed hikes rates by 0.75%. What it means for your portfolio
Fiona victims in Puerto Rico qualify for tax relief
What’s Going On With FedEx?